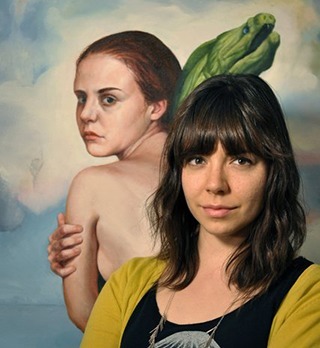 Dorielle Caimi’s portraits of women are psychologically complex, honest, and often disturbing. We’re excited to announce that our Fall 2013 issue will feature one of Caimi’s paintings, Until Proven Innocent, on the cover.

In an interview with Combustus, Caimi explains her attraction to the female nude:

As a female artist, I can’t seem to escape the subject that I most innately relate to: women. People tell me that I should paint more men, but the truth is, I’m painting from my own psyche, which manifests itself in the female form … I think women are beautiful creatures who make the most sensual of subjects, but I’d like to add something more to that sensuality: intellect, self-respect, intuition, sensitivity, humor, etc.

There is much to admire in Caimi’s paintings—their purely aesthetic appeal, their technical achievement—but there is also something uncanny about them. Caimi embraces this strangeness, insisting that our encounter with the best art ought to be discomforting: “it’s only when we are uncomfortable that we are forced to delve deeper within ourselves … [to] bring out parts of us we didn’t know we had.”