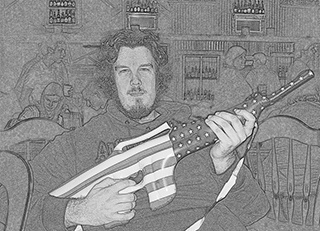 Marc Watkins’s stories are exciting, oﬀbeat, colloquial, and lyrical. We’re thrilled to be featuring his story “Shivaree,” about a backwoods marriage and the compromises of queer life in rural American, in our upcoming issue.

In his own words, Marc writes about:

High school dropouts, botched burials, cat ladies, a manure ﬁre that won’t quit, church lady gossip, hustling stolen corn, women taking Cialis, a cruciﬁed dog, Wal-Mart greeters, a gelding, catﬁsh noodling, passing your nephew oﬀ as white, a handsome pair of church shoes, an empty Minuteman III silo that might be a tunnel to China, three-legged dog breeding, setting ﬁre to the land to save the soil, and hope is held in the magic oﬀered in a possum’s penis bone.

Marc lives and writes ﬁction in Oxford, Mississippi. This year, you can read his stories in Boulevard, Slice, and Foxing Quarterly. His stories have appeared all over creation, including in Pushcart Prize XXXV: Best of the Small Presses. In 2012, he served as guest editor for Pushcart Prize XXXVI.