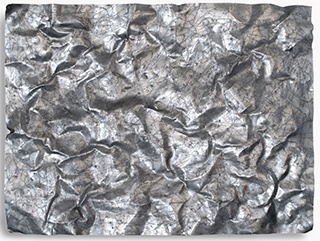 In the Fall 2013 issue, we will be featuring work by Keith Francis. Although Francis’s work reaches across media, from gauge cold-rolled steel sculpture to oil and mixed-media paintings, it is uniﬁed by its focus on the power of nature—speciﬁcally, the transformative forces at work when the ocean meets the land.

The paintings in The Paciﬁc Series, made with a variety of tools in oil paint on canvas, plaster of paris, gesso, and glue binders, capture, in Francis’s words,

Francis’s wall-mounted, cold-rolled steel plate sculptures are based on his photographs and observations of Venice, Italy. These hand-formed, extremely labor-intensive pieces show “the beauty of Venice against a backdrop of decay and rebuilding, in a never-ending struggle to survive against Mother Nature, time and the ocean forces.”