Diary of a First-Timer: Does AWP Have a Heart? 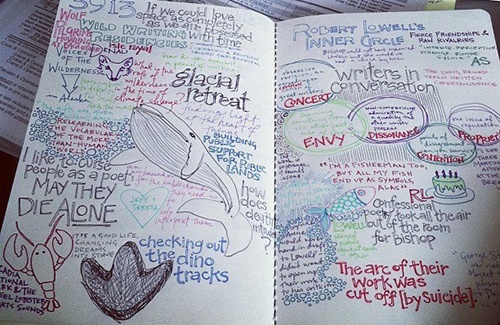 AWP has an odd reputation. In the early months of this year, people on the websites of various lit mags (as well as on plenty of personal blogs) were griping about how the literary world has degenerated into a who’s-who contest of networking wills, with the focus shifted away from ﬁnding and promoting the best possible writing to ﬁnding and entrapping potential writers in mountains of debt from pursuing MFAs and attending conferences where there is little on oﬀer beyond the false promise career advancement. I am ambivalent about the value of an MFA and generally angered by how much excellent writing goes unpaid these days, but all of the bitter talk only intrigued me. When I pre-registered for AWP just after Christmas, I was hopeful there might be more to it than the detractors would have me believe.

I’ve been out of school long enough to start craving seminars again. Nerdy, to say the least, but I was in excellent company. Hynes Convention Center was overrun with plenty of backpack-toting, glasses-wearing nerds like me who couldn’t wait to camp out in one of the many readings or discussion panels and take extensive notes. Wednesday night I attended the UMass kick oﬀ party at the Pour House, across the street from the convention center. The room was packed with people sporting lanyards and talking recent acceptances–to journals and graduate programs both. Lloyd Schwartz and Jill McDonagh talked shop with potential MFA candidates next to metal trays of chicken wings and a decimated crudite. Easing into the conference meant rubbing elbows with poets I’d heard on NPR and read in the Best American Poetry anthology, and I was wholly unprepared. I drank one-too-many of the massive draft beers and ended up discussing teaching poetry to children with Regie Gibson at great length. I had the blessing and curse of my home city hosting the event, which meant I didn’t have to pay for a ﬂight or hotel, and also that I had a few familiar faces to fall back on during my moments of awestruck burnout. It also meant that I took heavy advantage of sleeping in my own bed and missed the morning panels every day.

On Thursday morning, “Writing Masculinities” ﬂew by while I was brushing my teeth in Somerville, as did “The State of Literary Publishing,” but I managed to slog downtown in time for the panel on autobiography and experiement, as worthy an oﬃcial start to my conference experience as any. Though I rolled my eyes heavily when the intro to the discussion began with some hubbub about “rejecting false dichotomies,” the time was well spent. One panelist, A Public Space’s poetry editor Brett Fletcher Lauer, talked about how online dating lead him to construct a fake Craigslist Missed Connection using text from the proﬁles of fellow lonelies. A single line in the post, “putting the ‘ass’ in ‘Cassie’ since 1982” had PDR contributor, Cassandra de Alba, and I in hysterics. The central question of the panel, at least as I recorded it in my notebook, was “What is your heart?”

With heart and the construction of self still heavily in mind, I moved on to my next panel on Plath and Craft. This subject is a pet obsession of mine, one I argued about all through college poetry courses when I felt my classmates were focusing too heavily on biogrpahical details when explicating Ariel. (I even have an embarassingly empassioned paper about it sitting on my laptop desktop, begging to be expanded to Madwoman In The Attic proportions and self-published for the Kindle.)  Besides demarcating the diﬀerence between confessional poetry and Plath’s uncanny talent for self-mythology, the panelists showcased Plath’s excellent craftsmanship.  C. Dale Young removed all adjectives from “Poppies in July” and even stripped down, the word choice was so precise the poem could not be mistaken as the work of any other author.  Tara Betts implored the audience to treat Plath as a craftsman worth apprenticing ourselves to as poets, asking us to consider, “where does the image snap open long enough us to capture it?” as Plath might have when arranging her stark imagery into the verses we now know as hers.

If I had to declare the heart of AWP, I would say it is in the small clusters of writers sitting, heads together, before a panel or reading.  So many of us were misﬁts as children, buried in our notebook pages during recess.  In a convention center full of other misﬁts, there is an air of instant kinship.  Everyone is afraid to speak ﬁrst, so words explode out of people’s mouths in nervous monosyllables.  Entire sentences pass breathless, because there is simply too much to say.  There are plenty of people there for the pissing contest of who has published where and with whom, but the bulk of the people I encountered were simply delighted to skip out on work for a long weekend and get deeply entrenched in some friendly word play.