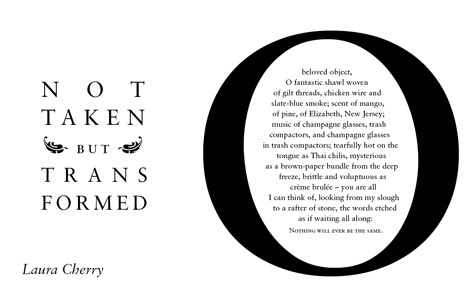 If you’re in the Boston area tonight, check out the latest in the First and Last Word Poetry Series, hosted by Arts at the Armory. The reading, which starts at 7 p.m. (doors at 6:30 p.m.), feature PDR contributor Laura Cherry along with Lawrence Kessinich and Paul Hostovsky.

Want a broadside of Laura’s poem “Not Taken But Transformed,” published in our ﬁrst issue? You can download one below:

Not Taken But Transformed, Laura Cherry.

(If you prefer physical objects to digital ones, it’s pretty easy to go from this PDF on your harddrive to a DIY poster on your wall. The broadside is designed to be printed at standard legal size, 8.5” X 14”. Regular stock is probably too ﬂimsy, but legal-size cardstock works great.) 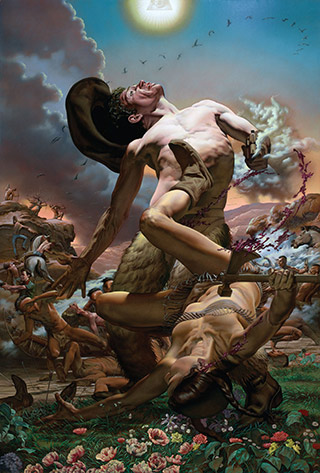 Nicola Verlato, the painter who provided the cover image for our Fall 2014 issue, composes mythological scenes with material drawn from popular culture. Verlato’s approach recalls that of old masters such as Caravaggio and Tintoretto, but also integrates techniques from video game design and animation.

The process for creating one of his paintings involves sketching, modeling maquettes in clay (a method used by Renaissance painters), three-dimensional modeling using graphic software such as Maya, photographs of models striking the poses of the painting’s ﬁnal ﬁgures, and a master drawing—and all of this before the ﬁrst brushstroke. This video from Hi-Fructose Magazine, shows the artist at work in his studio.

In an interview with ArtPulse Magazine, Verlato discusses his choice of subject matter:

I’m just painting what excites my imagination. My work is about bodies and narrative and so forth, about mythologies, speciﬁcally mythologies of our time. I like to gather visual information about these phenomena and combine them together in a new and more complex kind of representation, a very ﬁnished painting in which all the information is organized in a coherent and structured way.

Despite the increasing dominance of digital media, Verlato sees an important role for painting: “I think that painting is still a very important medium, if not the most important, in art, and I also think that today painting could have the possibility of regenerating and enriching its potential with a strong alliance with digital technologies, 3D and the Internet.”

Nicola Verlato was born in Verona, Italy in February 1965. In these last years he showed principally in New York City and in various galleries and museums around the States, Italy, and Norway, but also in India as well as Germany, Holland, and other European countries. His major achievement has been his participation with an installation of paintings and sculptures as a representative of the Italian Pavillion at the 2009 Venice Biennale. Since 2011 Nicola Verlato lives and works in Los Angeles. To view more of Verlato’s work, visit www.nicolaverlato.com.

We are pleased to announce our nominations for the second volume of Best Indie Lit New England, a print anthology series showcasing the best fiction and poetry published by independent journals in New England.

Poetry
"For Light, For Fire" by Sam Cha
"Y" by Changming Yuan
“Pedagogy” by Candice Wuehle
"Set Yourself on Fire” by Maggie Golston
"Before Ascent" by Justin Runge
"What New Century” by Nate Pritts

For more information about the anthology, check out the video below or visit the Kickstarter page to pre-order your copy or donate to the project. 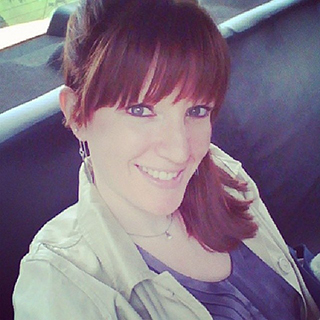 Christine Gentry, whose work appeared in our ﬁrst issue, will be featuring at The Story Collider, a live show and free podcast featuring personal stories about science—think The Moth meets Bill Nye. Tickets for the September 23rd event are available from American Repertory Theater.

Check out one of Christine’s previous performances on The Story Collider site. The Tidal Pool and the Sea, Christine’s ﬁctionalized memoir of her father’s life, was excerpted in our spring 2011 issue.

Christine holds a Ph.D. in English Education from Columbia University and is currently teaching high school English and serving as Director of Certiﬁcation for a network of charter public schools in Boston. In what little spare time she has, Christine likes to write short stories and perform in oral storytelling shows around Boston and New York City. Her work has been published in Word Riot and Flashquake, and her oral stories have been featured on the The Story Collider, RISK, and This American Life podcasts. She is currently working on a memoir project about her family. 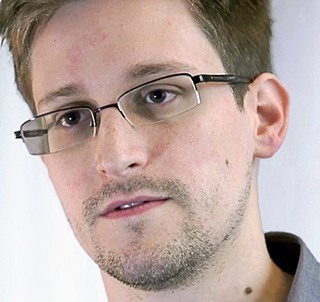 “Gorgeous…Beautifully put together…the kind of journal where good writers who go on to be great get their start.” These are just a few of the compliments paid PDR  in a review recently published on the journal review site The Review Review.

The writing in the current issue, the reviewer observes, is “solid, while still accessible,” the stories “earnest…[yet] unafraid to deal with violence, budding sexuality, or complicated family secrets.” We hope you’ll agree that “PDR is deﬁnitely worth a spot on both your reading list and your submission spreadsheet.”

You can read the full write-up at The Review Review site. 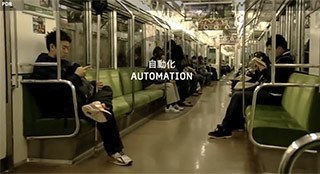 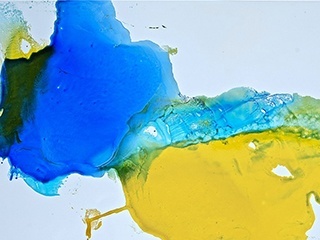 Paintings by Eileen Lang, featured in our latest issue and on view in our image galleries, are now available for sale at New York’s Road Gallery.

Lang’s paintings are inspired by the techniques of ancient Japanese suminagashi masters. Suminagashi, or “ﬂoating ink,” uses water and ink on paper to create a marbling eﬀect. Unlike in marbling, however, in which certain patterns are repeated, Lang’s pieces draw on serendipity and the processes of the unconscious. “I try not to ‘plan’ a painting. I like the spontaneity of pouring paint and  taking it from there. The main goal for me is then to develop balance, shape, and honesty in my work.”

PDR contributors Beth Castrodale (Spring 2014) and Jade Sylvan (Fall 2013) will be reading at the Arts at the Armory Cafe in Somerville, MA this Wednesday, June 18th. The event, I’ll Read You Yours, If You Read Me Mine, will feature artists, music journalists, poets, and novelists in a reading with a twist: rather than reading their own work, each writer will read the work of one of the other participants. The event is free and open to the public. 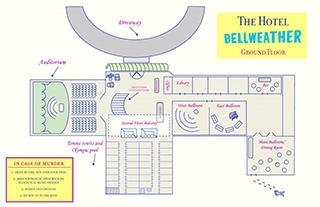 A high school music festival goes awry when a young prodigy disappears from a hotel room that was the site of a famous crime. This is the set-up for PDR contributor Kate Racculia’s new novel, Bellweather Rhapsody.

The novel has received glowing reviews from Publisher’s Weekly, Entertainment Weekly, and Kirkus Reviews. Racullia’s writing has been hailed as as “charming” (Los Angeles Times), “witty” (O, The Oprah Magazine), and “whimsical” (People).

We’re proud to have published an early excerpt from the novel, “Natalie Takes the Elevator,” in our ﬁrst issue.