The ballerina is careful of her feet

around bullets sparkling in the snow.

She pauses at each pine tree,

listening for the sound of dance,

hearing nothing but the night

yawning and unhinging his jaw.

She ties a scarf around a soldier’s missing jaw,

Her footprints are muddled in the bloody snow.

The ballerina wants only to dance

but these bodies and trees

are such poor partners. The trees

She is trapped in an awful dance,

avoiding rats by lifting her feet

well over the dirty snow.

They have started to eat bodies in the night.

The ballerina stumbles because the night

is so thick. Among the trees

she has found a soldier half-covered in snow,

a walnut still in his mouth.

She remembers days when her feet

were not cold, when the dance

was one they would have danced

together, while the night

watched in jealousy, stamping his feet

and shaking the trees.

and it begins to snow.

On stage, she loved the soap-flake snow

for its elegance, the way it danced

harmless with them, the taste in her mouth

when her smile was too wide. Night

gives the snow menace, each tree

an enemy, no place to rest her feet.

Her mouth open, she tastes the snow.

Her feet do not recognize this dance.

The night makes false princes of the trees. 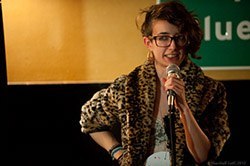 Cassandra de Alba’s work has appeared or is forthcoming in Red Lightbulbs, Amethyst Arsenic, Neon, and FRiGG. She has represented the NorthBEAST at three National Poetry Slams (with Slam Free or Die in 2008 and Hampshire County Slam Collective in 2010 and 2011) and performed up and down the East Coast with the No More Ribcage tour.

She has published several chapbooks and is working on another, but title-wise is never going to top 2009’s i am running away and joining a circus whose only act is to make the audience feel really, really bad about being happy. She lives in Somerville, MA.