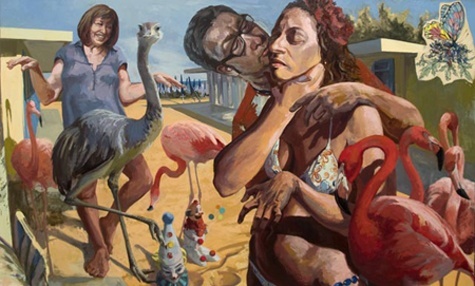 We’re thrilled that artist Teresa Dunn has agreed to let us use an image of one of her paintings for our Fall 2011 cover.

Teresa is an Assistant Professor of Painting at Michigan State University and the recipient of numerous awards and fellowships. She describes her work this way:

My narratives explore relationships through the absurd. Animals, food, and objects are important as humans by becoming symbolic, metaphorical or characters themselves. Their peculiar reality becomes normal, as in dreams or memory…My paintings investigate ways we navigate ourselves through life, environment, and our psychological eccentricities. Seasons, relationships, jobs, and cities attempt to deﬁne us. Peculiar occurrences, symbolism, and metaphor tie together some loose ends and fray others.

You can see more of Teresa’s work at her website. She is represented by First Street Gallery and Hook-Epstein Galleries.

Oh, and we should probably mention that we won’t be using the painting pictured above (Introducing my other half, 2010, oil on linen, 40”x66”) for the cover. We really like it, but it’s not the right shape. 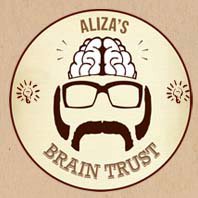 If you live in the Boston area and have been to an indie ﬁlm event, a queer dance night, a Dr. Sketchy drawing session, a spoken word performance–basically, if you have been involved in the creative scene at all–you probably know or have heard of of artist and indie impresario Aliza Shapiro. She performs, organizes shows and screenings, promotes her fellow artists, and just generally makes good things happen in the city and beyond.

On Monday, July 25, 2011, Aliza was admitted to hospital and is being treated for a stroke caused by a brain hemorrhage.

She currently has motor and vision impairment on her right side as well as language impairment.

Aliza’s friends have established Aliza’s Brain Trust with the goal of raising at least ten months worth of living expenses for Aliza as it is unlikely that she will be able to work for a long while. We hope you’ll consider making a donation to help someone who has given so much to support performers, ﬁlmmakers, artists, and others.

[I know we’ve been trying to raise funds for PDR, but honestly, if you’ve got money to donate, we hope you’ll send it to Aliza’s Brain Trust ﬁrst]. 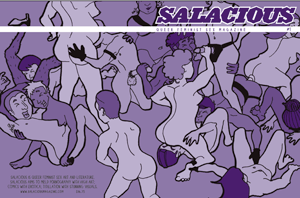 “Nothing is sexier than an intelligent hard-on.” So says KD Diamond, editor of Salacious, an independent magazine devoted to queer feminist sex art and literature.

With its oﬀering of erotica, poems, photographs, and comics (Diamond is a comic artist and illustrator), the magazine “aims to meld pornography with high art.”

Diamond and friends have put out two issues so far and the editors at PDR are big fans. That’s why we’re re-posting her call for support to print their third issue:

“Salacious #1 sold out within about 6 weeks of being printed. It was amazing! We did a print run of 550, and it went like hotcakes. It’s already become an amazing commodity.

We decided to take a risk, and we doubled the print run of #2. We have a much better printer, and so the cost was basically the same for doubling our print run. We’ve already sold approximately 500 issues of #2, so we’re at the same place we were with #1, which is wonderful!

The unfortunate diﬀerence is that, with #1, we had start-up funds, all of which went into printing promotional materials and helping with printer costs. Issue #2 has had nothing but capital from magazines, which, to be transparent, isn’t enough. We currently owe our new printer another $2700, and we don’t know where that money is going to come from.

For everyone that donates $10.00 in the next week, you will get a COMPLETELY ORIGINAL illustration from me. It’ll be a little bit like Illustration Roullette in that you will not know what you’ll be getting, but it will be hand-drawn and signed by yours truly.

You can donate here: http://salaciousmagazine.com/support.php

Or if you have a PayPal, you can wire money to kd@katiediamond.com

I know this is asking a lot. Many of us, myself included, don’t have a lot of spare change right now. I’m aware that start-ups are rough for the ﬁrst 3-5 years, and I’m willing to stare bold-facedly into that roughness and totally rock the hell out of this magazine. We are ﬁlling a void and supplying a new voice to the queer sex media, and I feel strongly about continuing this work. But I don’t feel right asking my printer to go ahead with printing #3–nor do I think he’d let me!–without ﬁnishing our payments for #2.

You are all amazing.

We didn’t think our online image gallery did justice to paintings by Sean Flood and photographs by Jarrod McCabe, so we made a new one. We also added a link to the main navigation; that way all you iconophiles can go straight to the images for all of our issues. We’ve posted galleries for the ﬁrst issue so far, but we’ll put up more in October when we release our Fall 2011 issue. 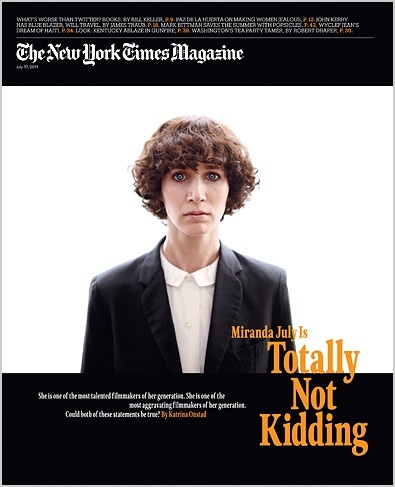 Miranda July is one of my favorite people, so I was excited to see her on the cover of this weekend’s New York Times Magazine.

I remember being knocked out by No One Belongs Here More Than You, her collection of stories in which lonely and shockingly odd characters make real or imagined–but usually unexpected–connections with other people. I especially love “This Person.”

July is probably best known, though, as a performance artist and ﬁlmmaker. Honest, intimate, and daring, July’s 1999 ﬁlm ”You, Me, & Everyone We Know” was hailed by Roger Ebert as one of the best ﬁlms of that year.

In April of this year, we had a chance to talk to July about her new ﬁlm, “The Future”. You can listen to the discussion here.

That’s right, our deadline for submissions to the Fall 2011 issue is August 1st.

Your ﬁction, poetry, essays, creative nonﬁction, painting, or photography could be featured in the next issue of Printer’s Devil Review. Check our guidelines and then submit your work. The editors are always on the lookout for new visions and voices and we like nothing better than helping an emerging or previously unpublished artist to reach a wider audience.

Like the stories, poems, and images in PDR? Help us keep this free, open access magazine going.

We’re trying to raise $500 in sixty days. This will pay for approximately 20 months on a fast and reliable server to host the magazine and our website. We put out an issue every six months, so that pays for three issues plus the extra content we add to the site–we featured an interview with Miranda July in May, for example.

We don’t have any outside sources of funding; it’s all out-of-pocket. We started by hosting the magazine on a budget server, but our readers told us they couldn’t always get to the site–it took forever to load, or the server kept crashing.  The service provider we were using was even the subject of a denial of service attack by a malicious hacker that disrupted our site for several days.

To promote the work we admire–from Pulitzer Prize winners to the never-before-published–and to reach our readers, we needed a more reliable web hosting service. We’ve made the switch but it’s costing us more money than we have. All the work we put into the magazine doesn’t mean much if readers don’t have reliable access to issues.

We hope you’ll consider helping us reach our goal by clicking here or on the “donate” button on the top left of the main menu. Thanks for your support and for reading the magazine!

Thanks to everyone that came to the PDR launch party last week–we counted at least sixty people!

Party-goers were treated to readings from contributors, danced to the Factory Seconds street band, and loaded up on free swag from the PDR merch table. Check out the gallery below for pics from the event.

On the eve of our launch party, Gabrielle Varela of the Cambridge Day posted an article about PDR. Varella describes the magazine as “lushly produced” and “brilliantly crafted … a gateway for artists to debut the way they deserve, as well as presenting a compilation of striking work to those with a love for art and a discerning eye.” We’re blushing a little bit, as that’s just about the nicest thing anyone’s ever said about us.

The party was a big hit, by the way.  Thanks to everyone who came! And stay tuned; we’ll be posting photos soon.

We’ve been hard at work making goodies to give away at our release party this Monday. We even got our hands on a button-maker this weekend and pressed about a hundred pinbacks; there are nine kinds–collect ‘em all!

PDR is non-commercial and committed to delivering our content and sharing our swag free of charge. There are costs to keeping the magazine going, though, so we’ve added a “donate” button to the site.  We hope you’ll have a look at our campaign at indiegogo.com and see if you’ve got any change between the proverbial couch cushions.

Join us for the party on Monday night at Middlesex Lounge and you’ll also hear readings by Laura Cherry, Christine Gentry, Chris Hall, Norah Piehl, and Kate Racculia. Stick around for music by the activist street band, Factory Seconds, and leave with a free shirt, broadside, or button. See you there!