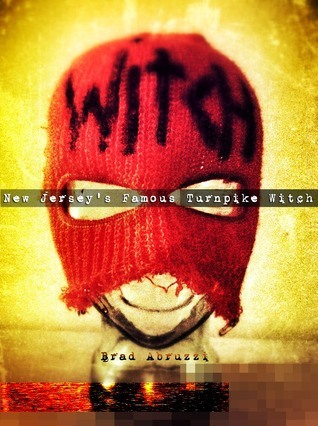 We’ll be featuring an excerpt from Brad Abruzzi’s novel, New Jersey’s Famous Turnpike Witch, in our next issue.

After years of encouragement from literary agents and commercial presses—but no book deal—Abruzzi decided to publish the book himself. At a recent talk hosted by the Berkman Center for Internet & Society at Harvard University, the author discusses the history of the relationship between authors and publishers.

In the age of digital media and the internet, Abruzzi asks, are commercial publishers acting as stewards of culture, ﬁltering out in advance books we would never want to read in the ﬁrst place? Or are they acting as proﬁteering philistines, holding great literature hostage to the bottom line?

You can watch a video of Abruzzi’s talk, “Amazons, Witches, and Critics – A Liberated Novelist Asks, ‘Now What?’” on the Berkman Center site. The novel is available for download for your ereader or computer at Amazon.com. 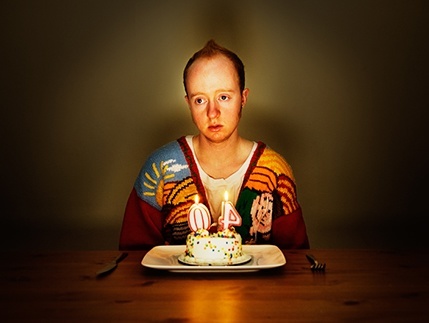 Caleb has this to say about a recent project, Other People’s Clothes:

At the heart of my work is a fascination with ambiguities and inconsistencies, an interest in how I go about negotiating areas of grey and how others manage to do the same. When I am in public, I watch people going about their daily routines alone; I wonder about the lives they lead, wonder how they experience the world around them and how they make meaning of it. I spend time inventing stories for them: narratives of isolation, of questioning and searching, of desire, and of confusion. The images in Other People’s Clothes are a product of my exploration of private moments of expectation, a visual expression of my experiences stepping into the shoes of the types of people I see on a daily basis. Each photograph in the series is a constructed scene that begins with an outﬁt or piece of clothing (either bought, found, or borrowed), then a person that I imagine to ﬁll those clothes, and ﬁnally a location where that person can play out a silent moment alone. This moment is the time right before something changes, the holding in of a breath and waiting, the preparing of oneself for what is to come. Though I am the physical subject of these images, they are not traditional self-portraits. They are portraits of people I have never met but with whom I feel familiar, as well as documents of the process wherein I try on the transitional moments of others’ lives in order to better understand my own. 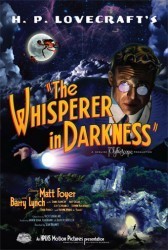 So, it looks like we were ahead of the trend when, in our latest issue, we featured an essay about independent ﬁlms based on the ﬁction of H.P. Lovecraft. Today, Salon.com featured one of these ﬁlms, The Whisperer in Darkness, as its pick of the week.

We projected scenes from that ﬁlm at our release party back in June. If you missed our screening (and live in the Boston area), take heart. The Brattle Theater in Cambridge will be hosting an H.P. Lovecraft Birthday Tribute from August 17 to August 19. In addition to The Whisperer in Darkness, the Brattle will also be featuring From Beyond, The Dunwich Horror, and In the Mouth of Madness.

If you haven’t read it yet, be sure to check out Brian R. Hauser’s “Call of the Cult Flick” in our current issue. Hauser takes the reader on a journey to the Lovecraft Film Festival and delves deep into the cultural signiﬁcance these cinematic horror stories. The piece also features jaw-dropping drawings by New Orleans illustrator Harriet “Happy” Burbeck.

We’ve extended our submission deadline for the Fall 2012 issue to August 15. Fiction writers, we’re especially interested in short story and novel excerpt submissions. We’re still waiting for that one story that’s going to bowl us over–is it yours? 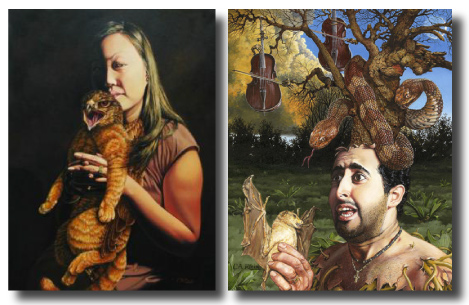 An amazing surrealist painter, Christopher A. Klein, has agreed to let us use an image of one of his works for the cover of our Fall 2012 issue.

For almost thirty years, Klein crafted scientiﬁc illustrations for National Geographic Magazine. His paintings, however, are in a surrealist mode. The artist sees a clear connection between these two practices of art-making: “Creating ancient cities from rubble, looking inside living creatures, and bringing the dead to life: scientiﬁc illustration is surreal by it’s very nature.”

He goes on to say of his current work:

Surrealism is a way for me to create my own world whether it be an archeological recreation, deep sea representation, or a futuristic scene… My ability to render in high detail and a vivid imagination are the prerequisites for creating accurate paintings of historic people, the places they lived and worshiped, as well as the inner workings of both animals and machines. After 26 years of scientiﬁc art, my work is now going full circle back to my ﬁne art roots in surrealism, now reﬂecting realistic images in unnatural settings or unnatural images in even more bizarre environments.

You can see more of Klein’s work at his website. He is represented by Ann Nathan Gallery.

PDR is proud to announce our nominees for Best Indie Lit New England (BILiNE). BILiNE is a new print anthology series showcasing the best ﬁction and poetry published by independent journals in New England. The ﬁrst volume will be published in Fall 2012 and will feature works that appeared between 2010 and 2012 in independent literary magazines throughout the region.

Our nominees, from our ﬁrst three issues, are:

Congratulations to the nominees. For more information and to support the BILiNE project, visit their kickstarter page. A $25 donation gets you a copy of the print book as soon as it’s printed. The kickstarter ends on Sunday Jul 22, 5:00pm.

We've cut out the middle-men and are now making PDR available for free download as an ebook directly from our site. Just go to the page for the issue and you'll see a link to download the magazine as a PDF or an ebook.Want to catch up on your e-reading right now? You can also download all three issues for your tablet or E-reader here:

Sorry, old-school Kindle users, but Amazon has a proprietary file format for its eBooks, so these files might not work on older Kindles. You can still get issues for those devices at the Amazon store, though.

As of today, we’re oﬃcially open to submissions of ﬁction, poetry, nonﬁction, and visual art for our Fall 2012 issue.  Check our submissions page for section guidelines and to access our online submission form.

Also, be sure to check out the new section of our site, the bookshelf, where you’ll ﬁnd books by writers and artists featured in PDR (including the likes of Miranda July, Franz Wright, Ed Skoog, and more). 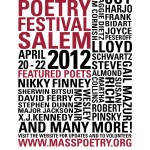 We’ll be in Salem, Massachusetts on Saturday, April 21st, at the Salem Museum Place Mall for the Small Press & Magazine Fair. The event is part of the Fourth Massachusetts Poetry Festival.

Check out all the great magazines and small presses and stop by our table where we’ll be giving away buttons and broadsides.

The new issue of PDR, due out in a few days, will feature an essay by ﬁlm scholar Brian R. Hauser describing a trip to the H.P. Lovecraft Film Festival. The festival is a gathering of Lovecraft fans and ﬁlmmakers who work outside of the Hollywood system to bring the horror writer’s stories to the screen. The essay will also feature mind-shattering illustrations by Harriet Burbeck.

Check out this trailer for The Whisperer in the Dark, one of the ﬁlms discussed in the essay … if you dare.