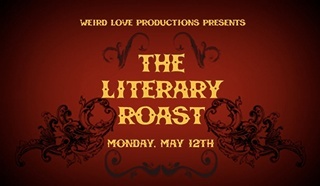 Ever wish you could  pop Ernest Hemingway in the jaw or em-dash Emily Dickinson? Do you objectively despise Ayn Rand? Then get your tickets to The Literary Roast, Monday, May 12th, at Oberon. This send up of literary greats (and not-so-greats) will feature music, comedy, readings, and burlesque.

The show is hosted by Jade Sylvan, author of Kissing Oscar Wilde (a selection from which is featured in our Fall 2013 issue), and includes inﬁnte jests at the expense of David Foster Wallace, compliments of poet and PDR contributor Sam Cha. 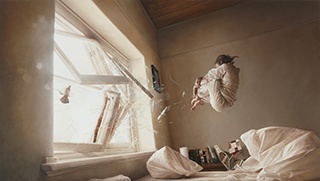 We’re thrilled to announce that we’ll be featuring a painting by Melbourne-based painter Jeremy Geddes for the cover of our Spring 2014 issue. One critic has described Geddes’s work as “awesome, and not the casual slang use of awesome, but its original meaning, which is to stand there gaping open mouthed and feeling totally overwhelmed.”

Geddes has won admiration and acclaim for his jaw-dropping paintings of ﬁgures at the mercy of invisible forces: cosmonauts plummeting to earth or ﬂoating through abandoned cities, everyday people suspended in the air or hurled through windows or walls, pigeons drifting in the vacuum of space. Geddes has also been awarded the Spectrum Gold Award for his cover art for the comic Doomed; his children’s book, The Mystery of Eilean Mor, also won the Crichton Award and was shortlisted for the Aurealis Awards.

The painstaking attention to detail in Geddes’s work have led some to dub him a hyperrealist. Geddes states that he has always been “drawn to realism,” despite a bias against the approach in the contemporary art world. Geddes is aware that his blending of the photorealistic and the surreal has appeal well beyond the walls of galleries and the pages of exhibit books, and he is not surprised that his work has found an audience “beyond the bubble of the ‘art world.’” A realistic approach, he argues, retains “the hooks that can grab the attention of otherwise disinterested passersby, and gives them an avenue into the work that can then lead to a greater connection.”

Geddes explains his process, through which a core idea is developed and revised over many studies:

There will be an initial kernel of an idea or a feeling, but moulding that into something that can withstand translation into a full work takes a lot of time and thought.

I like to progress through a series of studies, living with each one for a while as I try to understand what is and isn’t working.  At some point the image feels right, which leads on to the next revision and study and so on.  Then down the track, if it passes the test, I feel justiﬁed launching into a full painting. 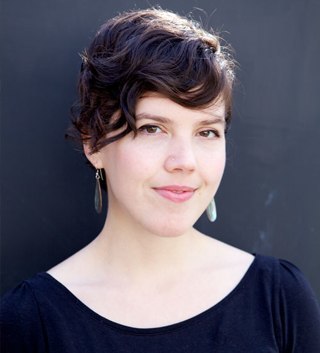 We’re thrilled to announce that Saturnalia Books has just released Thieves in the Afterlife, the debut collection of poetry by PDR contributor Kendra DeColo. We’re also proud that one of the poems from the collection, “The Dream in Which You Are,” was ﬁrst published in Printer’s Devil Review—in our ﬁrst issue, in fact.

Kendra DeColo is the recipient of an Individual Artist Fellowship from the Tenessee Arts Comission, a work-study scholarship from the Bread Loaf Writer’s Conference and residency awards from the Millay Colony and the Virginia Center for Creative Arts. She is the founding poetry editor of the Nashville Review and a book editor at Muzzle Magazine. She has taught creative writing in prisons, homeless shelters, hospitals, and middle schools. She lives in Nashville, Tennessee. 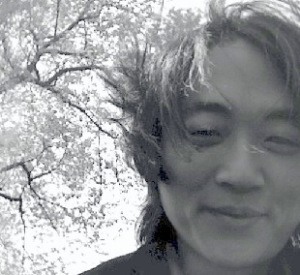 Remember when you were a teenager, and writing poetry was your secret shame? With the growth of several area performance poetry groups, writing and performing poetry has become – can we risk saying it? – cool. On March 21st at UMass Boston, MassPoetry’s annual Student Day of Poetry will bring together young poets from across the Commonwealth for a day of writing, workshop, and performance.

One of the featured poets at this year’s SDOP is PDR contributor Sam Cha. Sam earned his MFA in poetry at UMass Boston where he was the 2011 and 2012 recipient of the Academy of American Poets Prize. He is a poet, essayist, ﬁction writer, and translator, as well as the poetry editor of the online journal Radius. Sam will be performing work on stage, and leading workshops for the student poets in attendance.

For more information, or to register a student group, visit http://masspoetry.org/student-day-of-poetry-2014/. 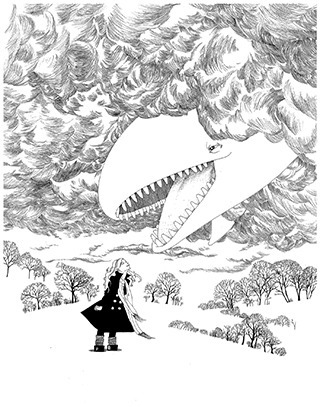 Illustration sensation Harriet “Happy” Burbeck, whose drawings are featured in our Fall2013 and Spring2012 issues, has just launched a new collaborative project.

llustrations for Stories that Haven’t Been Written is an exhibit of eleven drawings that opens at Ten Gallery in New Orleans on March 1. For this project, Happy is inviting writers to compose original narratives based on her stunning and surreal drawings.

All stories that meet the guidelines will be posted on the project website and stories submitted by May 15 will also be considered for publication in The Ark of New Orleans.

Need some excitement to get you through the winter? Got a crazy piece of ﬁction waiting for a home?

The Conium Review is a biannual, print-only literary journal that pushes the limits of ﬁction and poetry. Until March 15th, they are accepting entries in their 2014 Innovative Short Fiction Contest. This year’s judge is Manuel Gonzales, author of The Miniature Wife (Riverhead Books, 2013) and executive director of the Austin Bat Cave, a nonproﬁt creative writing center for children.

In the Innovative Short Fiction Contest rewards writers who are unafraid to take risks—to shock and impress, to do something new. The winning story will be published in The Conium Review’s next issue. The winning author will receive $500, ﬁve copies of the issue, and a copy of the judge’s latest book.

All manuscripts must be submitted by March 15, 2014. Submissions can include one or more stories up to a total of 7,500 words, uploaded as a single manuscript ﬁle containing no identifying information about the author. All submissions must include a $15 entry fee. All entrants will receive a free digital download of the issue. The winner will be announced by May 30th, 2014. o take risks – to shock and impress, to do something new. The winning story will be published in The Conium Review’s next issue. The winning author will receive $500, ﬁve copies of the issue, and a copy of the judge’s latest book.

If you're in Western Massachusetts or Upstate New York, we've just made your Thursday night plans. Jade Sylvan will be reading this Thursday, January 30th at 7:30pm at Frequency North, the Visiting Writers Reading Series at the College of St. Rose in Albany, New York.

In this interview with Frequency North, Jade talks about poetry, autobiographical writing, and her memoir Kissing Oscar Wilde, excerpted in our Fall 2013 issue.

The event is free and open to the public.

Devra’s doorway looked the same as it had before Keira’s funeral – shadowy and silent, while a bulb like a ﬂoodlight fronted every other house on the block. I almost tripped ascending the porch steps, and I thought perhaps I would ﬁx them for her.

Gemma Cooper-Novack’s story “Home Repair,” an excerpt from her novel-in-progress Go Home Faster (ﬁrst published in our Fall 2013 issue) is now available to read on our website. This web feature also includes a recording of the author reading the work, which explores gender, race, and coming-of-age with humor, pathos, and grace. If you want to read more (and we think you will), another excerpt, “Mars,” was just published in Elsewhere, a literary magazine about place.

Gemma is a writer, writing coach, and educator living in Boston. Her work has appeared in Hanging Loose, Aubade, Euphony, the Saint Ann’s Review, Rufous City Review, Blast Furnace Review, and Lyre Lyre and is forthcoming in Amethyst Arsenic and Spry. Her plays have been produced in New York and Chicago, and her article on writing coaching and disability in higher education, co-written with Eileen Berger, appeared in the NASPA Knowledge Communities Publication. Gemma intends to travel to all seven continents before she turns forty.

Only a few hours left to submit work for the next issue of PDR . . . 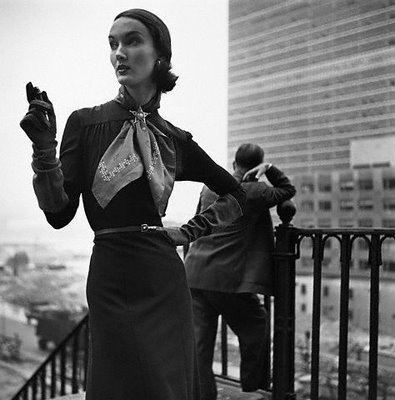 We normally shy away from genre ﬁction, but “City of Women,” an excerpt from Allan Converse’s novel The Dying Nude, is in a class all its own. A historian by profession, Converse carefully researched the lives of gay women in 1950s New York and produced a work that draws equally from the tradition of American crime ﬁction and the lesbian pulp novel.

We published the excerpt in our second issue and are happy to now make it available for screen reading on your computer, tablet, or phone. Read the piece or listen to a reading by the author. On the train or the bus, in your car or on foot, you’ll be transported to a world where queer nightlife is made possible by payoﬀs to police and the mob, where a subculture compels conformity to the categories “butch” and “femme” and punishes those who “switch,” where cross-dressing lounge singers rub shoulders with burlesque starlets and street hustlers, and where some are willing to commit murder to keep their secrets.

To learn more about Converse’s meticulously researched world of organized crime, abstract expressionism, burlesque performance, beats and bohemians, Communism, and lesbian life in New York in the 1950s, check out this interview with the author (by PDR editor Thomas Dodson) on Champs Not Chumps. The page for the episode also features image galleries, a bibliography, and links to resources about detective and crime ﬁction, the lesbian pulps, burlesque, and 1950s New York.